A reading of Strange Fruit, Part 1 by Jon Bastian

The LA Writers Center is proud to be a diverse organization. We have developed new work that has amplified BIPOC and LGBTQIA+ stories for almost two decades. But we can do better.

We think instead of speaking, it would be better to listen. Instead of making promises, it would be best to take action. With that in mind, LAWC is partnering with HowlRound to present “Breathe” an online play reading series designed to advance these stories.

We are presenting one reading a month through the end of the year.

Strange Fruit, Part I, written by Jon Bastian and directed by Martin Bedoian, will kick off the series. Strange Fruit Part II will be presented on Saturday 26 September, 2020.

A tale of the 20th century, Strange Fruit is a non-chronological and kaleidoscopic interweaving of multiple interconnected stories including the tale of Billie Holiday and her signature song, the Jewish Communist school teacher from the Bronx who wrote it, the Red Scare witch-hunt victims whose children he saved, the lynching victims who inspired it, the young black writer who was inspired by it, and the young gay man whose death shocked a nation and led to attempts at tolerance in the twenty-first century. Crossing lines of gender, race, religion, and sexuality, Strange Fruit strives to remind us that, ultimately, our commonality is in being human, and the danger is in focusing upon our differences, rather than our similarities. The play reminds us that hope is a fleeting thing, and that the advances of one generation can never be taken for granted when they can be taken back so easily in the next. The price of equality is constant vigilance and mutual protection.

The rest of the plays in the “Breathe” reading series will be announced shortly.

We hope you will attend, participate, and spread the word. We believe these stories need to be heard and we are now, more than ever, prepared to listen. 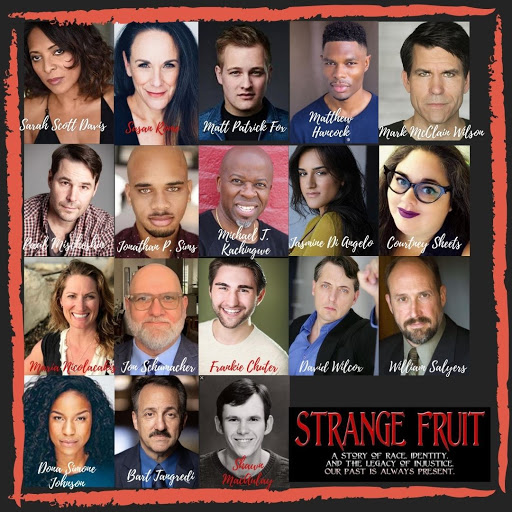