New Plays by the Numbers

Is Boston a Hidden Hub of New Work?

A little less than a year ago, StageSource, New England’s theatre service organization, started a new initiative to shine a spotlight on our region’s new play development and production activities—the New England New Play Alliance (NENPA). Our mission is to:

The NENPA’s loose coalition of theatre companies and theatre artists interested in new work started a whole bouquet of ambitious projects. One of the first was to undertake a comprehensive survey of new play development events and their attendance in Greater Boston over the 2012-13 and 2013-14 seasons. The results could be used to capture a snapshot of our new play sector, provide a baseline to assess the effectiveness of our programs, and help focus a discussion around the health (or lack thereof) of new play development in our region.

We defined a “new play” as a dramatic work intended for public performance on which the author is still involved in developing or revising the script. For this study, we counted total attendance, which includes complimentary tickets, as well as total seats filled, rather than the number of unique patrons seeing a show.

We purposely cast a wide net—we surveyed theatres of all sizes and budgets. Our goal was to be as comprehensive as possible in understanding where and how many people are attending readings, workshops, and productions of new work. The NENPA itself includes groups that range from unincorporated playwrights’ workshops (like Rhombus), to community theatres (like Firehouse Center for the Arts), to large professional companies (like the Huntington Theatre Company).

You can read the entire report on the StageSource web site here, or check out the Boston Globe article about it here. 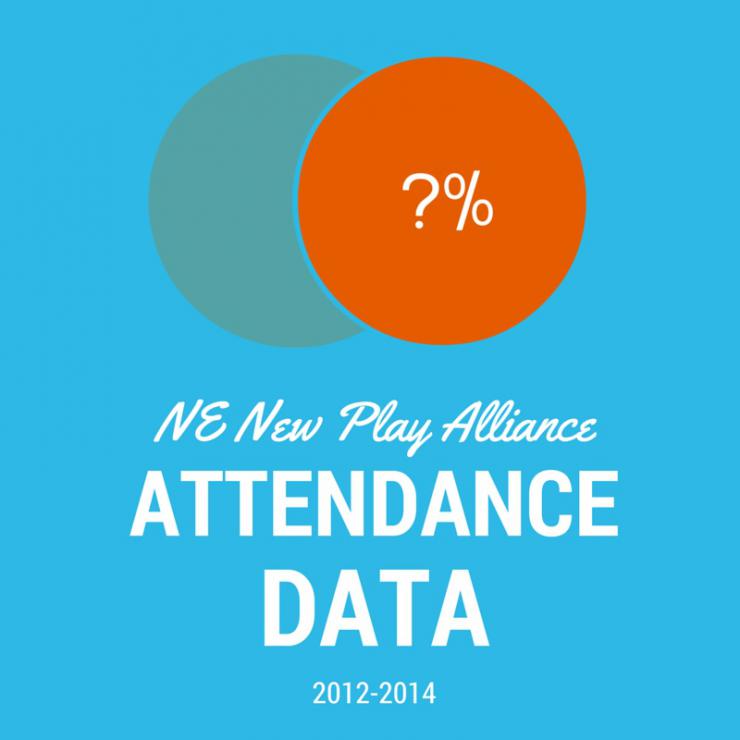 What We Found
Simply put: there is a lot of new work being developed in Greater Boston, by a lot of different companies. And a lot of people are going to see it. In two years, 287,403 patrons attended 1,699 performances of 207 new play events.

Additional facts we uncovered about new work in Greater Boston over the last two seasons:

Now, it’s true that our two largest companies, the American Repertory Theatre and the Huntington Theatre Company, drove a big chunk of the new play attendance. (You can read the full report for the exact details.) Excluding these two players, other companies still saw a total attendance of more than 78,000 people at 123 new play productions over this two-year period.

What It Means
Boston has become an active hub for new work at theatres across all levels of size and budget. We don’t have enough data yet to know whether this activity is on the rise, or has peaked, or how this period fits into longer-term trends. We do know that it’s happening here right now, in every nook and cranny of the theatre scene.

Much time and ink is spent bemoaning the decline of the American Theatre and the disappearance of an audience for new work. But what we’re seeing in Boston is that there is an active and engaged audience base that is seeing new work all across our city, viewing varied offerings from fifty-five companies, large and small. When studying how and where new plays are being developed, it’s important not to ignore smaller companies where many playwrights find their opportunity to develop new work and engage with audiences.

Simply put: there is a lot of new work being developed in Greater Boston, by a lot of different companies. And a lot of people are going to see it. In two years, 287,403 patrons attended 1,699 performances of 207 new play events.

What’s Next
The NENPA will continue to measure audience attendance at new work, and we will expand our data collection to include all of New England. Much of this new play development is being done with precious little financial resource. Boston takes great pride in being a center of innovation in the areas of technology, medicine, and education. It is our hope that this data can show the local funding community that we are also a hot spot for the development of new plays—and one that can strengthen its impact with additional sources of support.

We also intend to remind producers that though producing new work might seem risky, there are a lot of other people doing it, and lots of people seeing those shows. This study offers an opportunity to challenge prevailing perceptions of risk around new work. Instead of marketing “unknown,” “unfamiliar” work, we can perhaps reap the benefits of fear of missing out (FoMO)—“Guess what, lots of people go see new plays. Don’t be left out.”

We’re hopeful that other cities and regions will conduct similar studies, gathering comparable data. This would enable productive comparisons between different theatrical communities and allow arts administrators to more fully explore factors that impact the new play sector. The future of our art form and industry depends on the ability to create new plays that entertain and engage audiences and that reflect the diversity of voices and points of view within our society. These plays can only exist if we create an ecosystem where today’s creative artists have chances to develop and see their work on stage.

Though it was a lot of work, this study was conducted entirely by volunteers—proof that completion of a study like this doesn’t have to require thousands of dollars. The methodology is simple and the theatrical community in each city is finite. We would love to see comprehensive statistics from Chicago, Atlanta, Minneapolis, Seattle, Denver, Washington, and other cities nationwide. For those of us engaged in creating new work, it’s vital to understand the state of our world, to see where new plays are thriving, and to see where more help, support, and encouragement is needed.

Thank you Patrick for collecting all this data, and especially for the preview of the report you provided at the New Play Alliance meeting.

The one concern I have about these numbers is that given the number of theater goers who essentially only go to either the ART or The Huntington, if either one were to cut back on new plays, it would dramatically cut the number of audience members attending new play productions in a given season. The long term strategy for making Boston into a stable new play hub is going to have to be finding a way to draw audiences into the fringe -- and to ensure the fringe's long term sustainablability.

I think you're right, Ian. And not just the fringe, but also the mid-sized theaters. If you take a close look at the study, the very large jump in non-LORT new play attendance came about because the mid-sized companies did a lot more new work in 2013-14. I think we'll see the numbers jump again in 2014-15 (SpeakEasy did two new plays), but am curious if we'll see a dip after that, as some mid-sized companies slow down a bit (no new plays in the just-announced SpeakEasy season). (New Rep is one of my hero companies right now--they made a big impact on the numbers.

One thing that has me very excited is that Merrimack Repertory Theatre is now being run by someone with a much larger interest in new work. Adding more LORT-sized productions of new plays will have a very positive impact on our numbers. I

Roxanna Myhrum looks at the history of the iconic puppet show Punch and Judy and Sarah Nolen’s feminist adaptation of it, Judy Save the Day.