Will Power: I just finished up my National Playwright Residency Program residency at Dallas Theater Center (DTC). And you’re at the midpoint of your residency at DTC funded by the TACA Bowdon Family Foundation Artist Residency. Why is a playwright-in-residence at DTC important and necessary? And, field-wide, why is a playwright-in-residence important? Maybe it’s not important.

Jonathan Norton: It’s incredibly essential. It makes the invisible visible. Audiences and theatre staff get real insight into how the sausage is made.

Will: Because the play is the foundation for everything.

Jonathan: It all begins with the play. But in most cases, regionally—unless it’s a world premiere—the playwright is not really present for much of the rehearsal process, or around for many of the performances. So there is little access to that very vital person. The great thing about our residencies at DTC is that we live in the community. You lived here for the six years of your residency.

The conversation about our work carries on in a really cool way whenever we bump into folks at the grocery store or an arts events or what have you. People feel a sense of ownership about the work because it was made by someone who lives in the same city as them. That makes the theatre real and necessary and tangible, especially to people who might not attend often or at all. And I love that.

Jonathan: The thing I’ve been wondering about the most is what a residency looks like on paper—if you had to write a job description for a playwright-in-residence, what would that look like? Oftentimes I feel that, from a financial standpoint, for artists to be valued in that way, there’s an additional administrative or production role you have to play.

The great thing about the NPRP residency is that it’s beginning the conversation about the value of artists in institutions solely as artists. Can you break down your work and responsibilities at DTC? 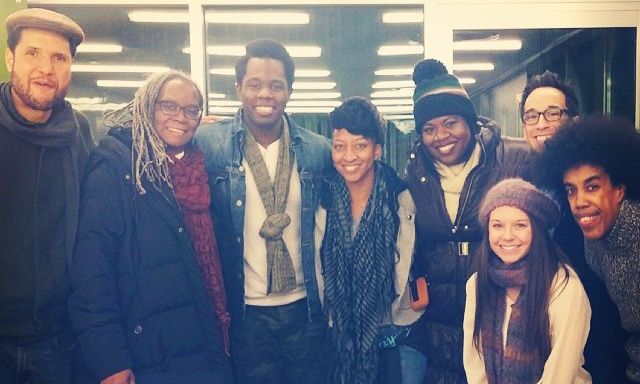 Will: I had some administrative responsibilities related to fundraising, marketing, and community outreach—assisting with different projects and initiatives in those departments to support the institution. I was also responsible for conceiving and managing the Dallas Playwrights Workshop. But the lion’s share of my time was writing, for both the works I was doing at DTC and also for other projects. That was part of the position, that I’d have time and space to write plays whether they were for DTC or not.

I don’t feel like it created any friction, if that’s what you’re asking. If it did, no one ever told me that. Part of it probably was that my salary was paid by the Andrew W. Mellon Foundation, which funds NPRP. If my salary had been paid by DTC, maybe there might have been a little more pushback, like, “I didn’t see you this morning.”

What is your schedule like? Are you there full-time?

Will: How does that work?

Jonathan: My residency, funded by TACA, is a very generous amount of support, but unlike Mellon it is not a full-time opportunity. I work full-time at Southern Methodist University, and fortunately I have a great boss who allows me time off for rehearsals, travel, and workshops, plus she celebrates my general artist craziness.

My contract with DTC was designed to accommodate the fact that I’m not able to be there full-time or even part-time, so things are very specific in terms of my responsibilities. In addition to writing, my responsibilities are mostly related to serving as a teaching artist for the education department, community outreach, and spearheading the Dallas Playwrights Workshop.

The great thing about the NPRP residency is that it’s beginning the conversation about the value of artists in institutions solely as artists.

Will: Someone needs to drop some cash to make your residency full-time. Imagine the things you can write and also the programs you can start with all that time freed up.

Jonathan: I would love to be there full-time, but I’m learning that’s a complicated conversation with many moving parts. Outside of the Mellon Foundation model, there’s still work to be done to find more ways for individual institutions to model that on their own. I’m proud that DTC has taken the lead in finding ways to keep the residency going.

The other question is: If the residency were paid for by the theatre, would that change the nature of the residency? Would playwrights need to accept more administrative or production- and producing-related responsibilities? Also, is it time for playwrights to take the lead and find their own sources of support for such residencies so as not to cannibalize support the theatre needs?

What were your goals during your time at DTC?

Will: I had three main goals. One goal was to have a creative home as a writer, to write pieces for DTC and for other theatres. The second goal, which was just as important, was to try to help the trajectory of playwrights in Dallas. There are some really talented playwrights here, but we’re in Dallas, we’re off the beaten path culturally. So how are they going to get the craft? There are no MFA playwriting programs in Dallas.

I wanted to champion local playwrights. And that meant doing the Dallas Playwrights Workshop. Early on I started working with Teresa Coleman Wash and the Bishop Arts Theatre Center. And then, of course, there was my work at Southern Methodist University. That was really important to me. My wife Marla always talks about, if you get in the door, how do you leave it open and try to let other people through? A lot of times people get in the door and they just say, “Okay, now I’m in the door. It’s all for me.” I’ve always been very mindful about how I keep that door open.

The third goal was to work on diversity, all kinds of diversity, particularly ethnic and cultural diversity at DTC.

Jonathan: That’s important to me too. While I’m at DTC, I’m trying to find a way to become more engaged in marketing, audience outreach, and development initiatives. Really trying to learn as much about how it currently works and then trying to find ways to subvert that. What often happens with so many large LORT houses is that they have a lot of expertise in certain areas—they certainly understand engagement with their subscription audience and long-time patrons, with a more traditional theatre audience. But they struggle with figuring out how to connect with and excite and inspire folks who are not part of that traditional audience. Folks who perhaps have never visited their theatre.

How do you create new models that can actually reach those audiences? I want to be part of making those discoveries and developing solutions. The DTC production of my play penny candy was exciting in that way because we tapped into an audience who had never attended a show at DTC.

Will: That’s the six-million-dollar question right there.

Jonathan: Can we talk about the role of DTC as your artistic home?

Will: DTC was, and still is, a home base of mine. Originally I thought it would be where most of my new work could premiere before going to other places. I felt that some of my work, like Fetch Clay, Make Man, and Stagger Lee, fit perfectly with DTC’s mission. But I have other pieces that are a little different, that wouldn’t necessarily be right at DTC.

Jonathan: I can understand that.

If you get in the door, how do you leave it open and try to let other people through?

Will: What are some of your big dreams and how can the residency help?

Jonathan: The residency has reminded me of an idea that I’ve had for quite some time, to create a theatre here in Dallas that empowers local playwrights to produce their own work. I’m really inspired by the model created by playwright producing collectives such as 13P or Orbiter 3 in Philadelphia, or the Welders in Washington D.C. I’m learning more about how plays are made in terms of production, marketing, fundraising, and such—I have a DTC email and get all the company emails, and it’s this wonderful education. penny candy was also a great learning experience. So I’m realizing that it would be so cool to take what I’m learning here and use that knowledge to figure out a way to support local playwrights.

Will: What does that look like for you so far?

Jonathan: Keeping the Dallas Playwrights Workshop going. It’s my first time being the person pulling the trigger, the one actually making the final decision of who gets in and who doesn’t. So it’s my first time crafting rejection letters. I’ve received so many rejection letters myself, so that was really, really, really hard to do. It was so hard that in the rejection letters I actually wrote, “This is really difficult. I’ve never done this before. And I know how it feels to get this letter, because you feel like you walk away empty-handed. So if you’re interested, I’d love to have coffee...” I’m writing it, and I’m thinking, like, “What am I doing? This is going to turn out horribly.”

About twelve or thirteen people took me up on it, so I’ve been having these coffee chats.

Will: Hold on, you did that? You actually took everybody you sent rejection letters to out for coffee?

Jonathan: It was not like, “Let’s have coffee so I can tell you about your play and what I thought.” That’s certainly not what I wanted to do. It was more, “We can meet. I can learn more about your work and your goals and start a conversation.” It’s been amazing. I’ve had three so far with multiple groups of writers at a time. And I have one or two more to go.

Will: That is a major idea, because you’re basically talking about building a community of people, of artists. That’s really powerful.

Jonathan: Most of the time when we get rejection letters, it’s from a theatre or development organization so many hundreds of miles away. The letter could be really encouraging and lovely, but that kinda feels like the end of it. I figured that since I’m here, and they’re here, there’s nothing stopping us from having coffee and meeting. The letter doesn’t have to feel like the end of the line. Maybe it can be a beginning.

Will: That’s really exciting. It speaks to the power of local. Because if someone get a rejection letter from New York and they live in Alaska or Denver, there’s no value beyond the letter.

Jonathan: It goes back to what you said: community building.

Will: I think a playwright-in-residence can hold space for that.