Queering Machismo from Michoacán to Montrose

Born and raised in Houston, Josh Inocéncio is a playwright and performer who focuses on queer and Indigenous reclamations within Latina/o and Euro-American cultures. As a cultural worker, storyteller, and bridge-maker, Inocéncio’s purpose, in his words, “is to bridge my ancestries and nourish the memories. With each generation preserving fewer fragments, I perform to remember.” In June 2016, in a special collaboration with ProyectoTeatro of Austin, Inocéncio debuted his solo piece Purple Eyes, the first in a trilogy that looks at his three cultures. Splintered in Three: An American Trilogy also includes The Little Edelweiss: or, An Immigrant’s Fairytale, which focuses on his Austrian roots, and Chocolate Gravy and White Jesus, which focuses on his rural Kentucky Appalachian roots. In all three pieces, Josh performs as himself and ancestral figures from his three backgrounds. 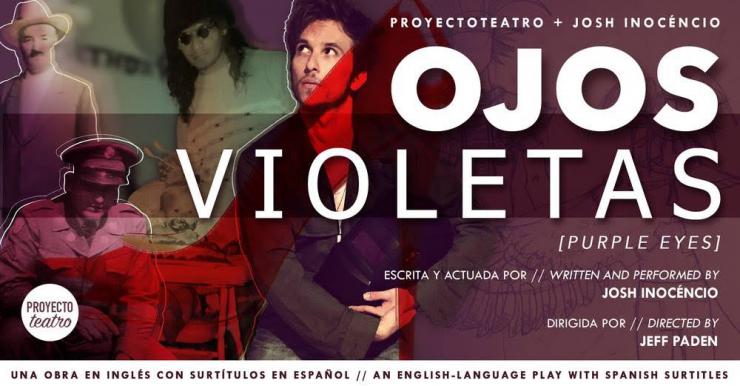 Under the direction of Jeff Paden, Purple Eyes explores the intersections of queerness and Chicana/o identity alongside the legacy of machismo in four generations of Inocéncio men, from Michoacán, Mexico, to Houston, Tejas. The Inocéncios have origins in Michoacán, a state in southern Mexico, and as Inocéncio’s cousin Chuy suggests in Purple Eyes, “those Michoacán men, tú sabes, are on another level of machismo.” The play is what Inocéncio calls an “ancestral auto/biographical” performance piece which explores his upbringing as a closeted gay Chicano living in the midst of the cultural heritage of machismo in Houston.

Purple Eyes explores the intersections of queerness and Chicana/o identity alongside the legacy of machismo in four generations of Inocéncio men.

Following a legacy of solo performance storytelling aesthetics seen in John Leguizamo’s Freak and Luis Alfaro’s Downtown, Inocéncio’s Purple Eyes plays with memory to understand how the United States and Mexico have influenced his family and his own identity formation. In the piece, Inocéncio invokes four generations of Inocéncio men, giving life to his great-grandpa Jesus planting strawberries in Michoacán, his grandpa José fighting in World War II, his dad Joel going undercover in drag at gay nightclubs in Houston, to finally himself embracing his sexuality and finding where he fits in his own legacy. Purple Eyes uses memories as platforms in which Inocéncio reclaims contested moments in hyper-masculine environments in each man’s life.

To write the piece, Inocéncio used his own stories and oral histories he collected from family members across Texas. Rather than writing the biographies of these men, Inocéncio uses their stories as a point of departure to re-imagine and re-interpret familial memories, thus queering his genealogy and offering new understandings for his own life and place in the line of Chicano men, both Inocéncio and not. Purple Eyes is not simply a biography or a historical narrative, but Josh Inocéncio’s queer imagining of his family’s histories and memories. Given the piece is a solo play in which Inocéncio portrays all the characters, Purple Eyes is an autobiography that weaves Josh’s own narratives through multiple generations. Ultimately, through understanding his ancestors, Inocéncio comes to better understand himself.

The title, Purple Eyes, originates from the purple sunglasses his father wore working as an undercover police officer in Houston’s gay nightclubs. Yet, the purple eyes go beyond the physical object and enter a metaphorical realm in which Inocéncio uses the notion of “purple eyes” to foreground how the men in his family have queered the world around them despite their hyper-masculinity. According to Inocéncio, “From strawberry farms to the US military, and from welding shops to the police force, the piece interrogates passages of masculinity and how the men in my family have negotiated supremely heterosexual spaces that view queerness as a weakness.” In foregrounding his own story, Inocéncio demonstrates how accepting his queerness has given him strengthen and flexibility within a machismo context.

There are many ways to access and recapture culture. For Inocéncio, reclaiming his roots has been inextricably tied to language; he began learning Spanish at age twelve (and German at age fifteen) to reclaim his linguistic identity. When his grandfather moved to Houston in the 1950s, as in most regions across the country, Mexican immigrants faced much discrimination. As such, they encouraged their children to assimilate to mainstream American culture. The clearest way to “pass” as “American” is through language. We see this throughout Purple Eyes as Inocéncio seamlessly code-switches between Spanish and English, depending on the needs of the story. For instance, the chapter on his father, who doesn’t speak Spanish, features very little Spanish accordingly. The final chapter, which focuses on his own journey, begins emphatically with Inocéncio announcing the World Cup in Spanish. As he narrates the stories of his first two loves, a Venezuelan and a Puerto Rican, he mixes in Spanish, emphasizing his multicultural identity as a twenty-first century Chicano.

During one extended sequence about his grandmother Fritzi and her unwanted pregnancy and abortion, Inocéncio incorporates strawberries. We remember that his great-grandfather worked as a picker on a strawberry farm. He gathers strawberries, washes them in the water bowl, and just before he places them into a blender, we hear the voice of Fritzi's mother: “I can’t take care of another grandchild, she said. I can’t keep raising your kids, she said.” Fritzi screams, Inocéncio turns on the blender and repeats “Ich kann nicht” (“I can’t” in German) and the metaphor is complete.

As if it wasn’t scandalous enough that my grandma had a brown child outta wedlock, she got pregnant again! It’s so funny! Oma acts like she’s so traditional, but her life is like something you see on reality TV nowadays!  Babies outta wedlock, running away with a Mexican, a gay brother named Manfred, and….an abortion.

When Inocéncio pours the strawberry chunks and juice into the water bowl, he reveals that Fritzi was pregnant with twins. Years later, Fritzi became pregnant with twins again, this time giving birth to Josh’s father and his uncle: “As far as I’m concerned, those gemelos were reborn into the bodies of my dad and Uncle Joe.  Persistent tricksters who chose to be born no matter what.”

While Purple Eyes is a powerful solo show in its own right, the night I attended had an added layer of meta-theatricality because several characters from the show were in attendance. As Inocéncio reenacted his father’s experiences as an undercover cop in Houston’s gayborhood, the audience was privy to the elder Inocéncio’s reactions (mostly laughter). In another instance, Inocéncio uses Barbie dolls to explain the family dynamics of his father’s sister and sister-in-law’s. During this scene, two of the Barbie’s real-life inspirations laughed along while the performer poked fun at them.

While Purple Eyes is a powerful solo show in its own right, the night I attended had an added layer of meta-theatricality because several characters from the show were in attendance.

While these instances of having the subjects of the play in the audience made for a unique viewing experience, perhaps the most poignant aspect of the performance I witnessed occurred after the show. During the talkback, Inocéncio’s Uncle Manuel (the oldest son of his grandfather Jose’s brother) introduced himself and then paused as he struggled to find the right words. My heart rate increased as I waited for him to speak. Manuel commented that he regretted the divisions that have occurred in the family and that he was moved by what he had witnessed. Manuel had not seen Josh’s father since 1994 at a family funeral. The moment was particularly touching and demonstrated the power of live theatre. While the audience was granted a brief window into Josh Inocéncio’s Purple Eyes, his family was able to use the performance to reconnect and ultimately tap into the healing powers of solo performance.

What a wonderful depiction of the play night in Austin! Trevor, you totally nailed every aspect of the evening. I am such a proud mother of Josh's work and his enthusiasm. As one of the four Barbie characters in the play, I acceptably endure some of those jabs as well as my sister in law Gwen, who was in attendance. We laughed and cried during the play. When art brings to the forefront true reality, you face it head on. Josh brought these real life events to the stage and as a writer, performer and director he made you feel each and every moment in time as if you were living them yourself. This is real art: It makes you feel things you have never experienced before.

Thank you again Trevor for this wonderful article.

I loved seeing this show and especially the moment with Josh's tio. I felt like I was watching a very intimate moment-- true witnessing. Thanks for sharing this, Trevor!

Thank you, Trevor, for this beautiful writing on my play! That first night in Austin was particularly poignant for me (and I reflect on it often) as family members engaged with my performance. I'm so happy you chronicled those reactions.

Love it, Trevor. You really captured the impact of the piece and that particular performance with Josh's family members. That was special. Thank you for documenting it. And congrats to you, Josh, on your affecting work!

Thanks for the positive feedback, @roxanneschroederarce:disqus! I'm glad we got to experience the piece together!

One Transgender Youth’s Story on Stage

Roxanne Schroeder-Arce talks about Dallas Children’s Theater’s production of ANDI BOI and the importance of seeing trans stories in theatre for young audiences.

The Orphan in Me
Dominick
DeGaetano
Essay

The Orphan in Me