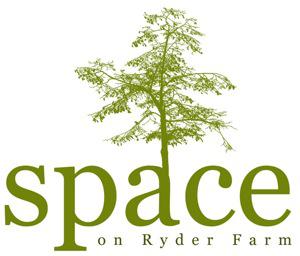 The first thing I noticed when I visited at SPACE on Ryder Farm is the quiet. It’s quiet at SPACE on Ryder Farm. You could spend all day writing in the gazebo, and the only sound you’d hear is the crunch of pickup truck tires on the gravel driveway—somebody dropping off a tarp or taking a load of tomatillos down to the farm stand. If you’re looking over a script in the library of the restored 18th century homestead, you might find yourself startled by the creak of a floorboard upstairs, deafening in the relative silence. Through the screen door in our communal kitchen, you might catch a bale of laughter from The Corn Crib, where a writer and director are batting around ideas, or from the stage in our natural amphitheater, where a dance rehearsal has devolved into a cartwheel competition. Off in the distance, a composer and lyricist are taking a break to do cannonballs off the dock into the lake. 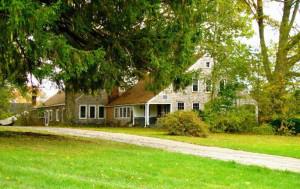 When Emily Simoness founded SPACE on Ryder Farm, she had hoped to create an artists workshop where the serene environment was broken only by the sounds of artists at work (and artists taking a break from work). Three years after its inception, she’s very much succeeded.

Growing up in Minnesota, Ryder Farm seemed to Emily a mythic place, the far off homestead that had been in her mother’s family since 1795. When Emily first set foot on the property in 2009, she found a fully functional organic farm—the first organic farm ever represented at the Union Square Green Market, it turns out—occupying about a tenth of the farm’s total acreage. Much of the rest of the land had been reclaimed by nature. Fields were overgrown and much of the half-mile of lakefront was covered in dense woods. Many of the structures, particularly those that remained from the 1790s, had fallen into disrepair.

So, Emily did what anyone would do: she started an artists residency program there. 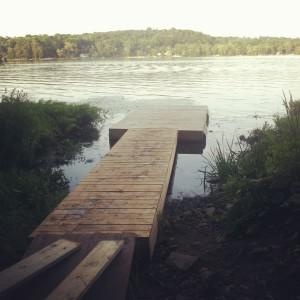 Volunteers helped restore the 18th century buildings. They cleared a path to the lake and built a dock (suitable for cannonballs). They renovated the Corn Crib into a private workspace and loft (and also the only building at SPACE with internet access). They set to work on a dilapidated barn and converted it into a rehearsal studio decorated with antique farm equipment and a 19th century carriage. They created places to sleep, eat, and work. Ryder Farm provided the bucolic setting, and Emily and her team provided the means to create art within it.

Every year brings with it new challenges, new surprises, and new members of the SPACE family. We can’t wait to see what our artists bring to the farm this year. 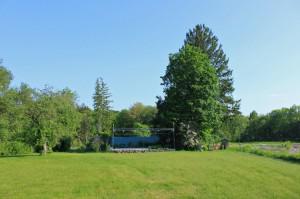 Over the past three years, SPACE has blossomed. It has played host to Pulitzer finalists, Tony nominees, and Obie winners. Its fellowship and residency programs have been incubators for plays and projects that have gone on to long and fruitful lives across the country. SPACE’s long, communal dining table, where meals made using farm grown produce, has been the birthplace of many personal and artistic relationships. All of SPACE’s programming is based on one central idea: artists do their best work when they are free to create. SPACE makes no demands of its artists in residence except that they work, and SPACE’s staff makes sure that the artists worry about nothing except their work. 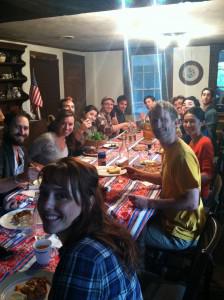 This summer will be SPACE’s fourth season. Improvements to the property continue—one of the barns needs rain proofing and the salvaged Brooklyn church pew mounted in front of the picnic table on the dock hasn’t survived the winter weather very well. This year SPACE launchies its first writers group, The Working Farm, with inaugural members Sarah Burgess, Madeleine George, Branden Jacobs-Jenkins, Justin Kuritzkes, Gregory S. Moss, Erika Sheffer, and Mat Smart. The Working Farm will test out a new residency model, one which will bring artists to the farm for weeks instead of days. We’re engaging in new partnerships with theater companies and developing pieces specifically for production.

Most of all, we’re excited about another round of fellowships and residencies. Every year brings with it new challenges, new surprises, and new members of the SPACE family. We can’t wait to see what our artists bring to the farm this year.

Applications for SPACE’s 2013 season are project-based and will be accepted through March 8th. Artists are granted residencies based on the vision, originality and universality of their proposed work. For more information and to apply, go here.