Recommended
Devising Our Future
HowlRound Theatre Commons
Most Discussed
Designing Collaboration: In Search of a Taxonomy of Collaborative Methods
Emily McConnell
Most Watched
The Gathering from the CrossCurrents Festival
Wednesday 4 May to Saturday 7 May 2022
Upcoming
Livestreaming a Conversation: #DeafWoke with John Autry II
Friday 20 May 2022
Essay by
P.
Carl 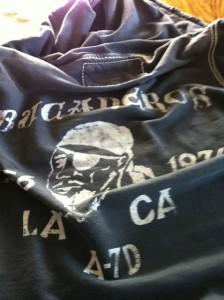 It’s fall and I’m reading plays. I know it’s fall because the silly pirate hoodie is out. I like to sit on the couch on crisp fall days with the hoodie hood up, football muted in the background and read scripts. This year I’m reading from a couch in Boston. Last year it was a couch in DC, and the year before that a couch in Chicago. But it doesn’t matter where I move, the plays follow me. And I’m always reading in fall because I was supposed to read in summer, but it’s not the same, reading plays in summer. Stories have a different texture in July and August. They feel sluggish and sticky. A weekend bike ride calls, a cookout, a beer—but no plays please.

In September the theater photographers are in full bloom and I start seeing images of beautiful fall productions on Facebook. Everything looks 3D and lively and suddenly stories matter again, and I realize that broken promises to read the unread must be kept.

I’m always reading in fall because I was supposed to read in summer, but it’s not the same, reading plays in summer. Stories have a different texture in July and August. They feel sluggish and sticky.

And this fall the challenge is particularly daunting, how to read plays and edit journal posts, and write journal posts, and launch a new Center? How to keep the new and undiscovered stories of the stage in my purview? How not to give up on them in the hopes that the unread will be made alive by some other theater type in some pirate hoodie in some other city?

Some thoughts on the unread without completely killing the metaphor:

I’m grateful for fall. I’m glad to be alive in this profession. I’m glad to be inundated with stories of street kids, Muslim women, former Secretaries of Defense, Catholic school girls, and all the unread waiting their turn to see the light of day.

Literary Management
Most Discussed
Designing Collaboration: In Search of a Taxonomy of Collaborative Methods
Emily McConnell
Most Watched
The Gathering from the CrossCurrents Festival
Wednesday 4 May to Saturday 7 May 2022
Upcoming
Livestreaming a Conversation: #DeafWoke with John Autry II
Friday 20 May 2022

Thanks, Polly! I think you are right to be "frightened for our profession." I believe the problem lies in the last word of that sentence, "profession." What is a profession for some, isn't and can't be for playwrights--except for the three or four (as you say) anointed plays each season. There is something badly wrong with the system (at least, if you think art and new ideas matter) and until we have an artists' revolution, things won't change. I believe it's entirely possible for theaters to program seasons in good faith but, as Marx pointed out over a century ago--- to understand the relations between people, capital and goods, one has to look at who has control over the means of production.

Overwhelmingly, playwrights "submitting" to the current system have NO control over the means of production. Artistic directors have a lot. Boards have a lot. The not-for-profit structure shapes and frames the conversation. Dramaturgs and literary managers are like court jesters, close to power by whim and favor, trading in the currency of knowledge and gossip, and acting as brokers and tension circuit-breakers between the great unwashed and the Court.

I consider all this to be happening with no conspiracy or intentional meanness. It's just (as Foucault pointed out) that knowledge and power are co-productive of one another. So "taste" in the (moneyed) theater is brokered by those with control over the means of production, and supports a closed-circuit tautology: these 3 playwrights are "hot" because we say they are, because they're hot, because we say they are, etc.

Given this, why are you reading these other plays? What do you hope to do with or about them, other than bleed a little steam out of a machine, that might otherwise build up and break the system?

The conversation would be different if the question theaters frankly asked, and required their dramaturgs to answer, was "How do these plays serve the means of production (and those that underwrite it) we already have in place? How do they affirm and continue to strengthen the status quo that routinely stages men over women, hot young playwrights over seasoned voices, and family dramas above all else?"

But I see we've returned to the topic of "truthiness."

Thanks for this thoughtful reply! To your question -- why am I reading all of these plays? I ask myself this all of the time!! When I tell a playwright I will read a play, I'm always very clear about the context I'm reading in. In my current context, I'm not producing plays as a primary focus so I'm clear that my reading is done in a context where I will have limited impact. I also make clear that because I'm reading in that context where I'm not going to produce something I tell playwrights to delete/ignore my thoughts about the play unless they resonate and are truly helpful. Why take opinions from me if I'm not going to commit to the play in some way?

All that said, I read for two reasons. The first is because I love plays, I love theater, and I love being introduced to new voices. I love being surprised by stories and discovering imaginations I wouldn't know about otherwise. The second reason I read is because I believe I have a responsibility as someone who has been given so much by this field, to give back my time to the artists struggling to make a living, struggling to be seen and heard. I know the best way I can engage and acknowledge those artists/playwrights is to read their work, take it seriously, and respond honestly to it.

Thanks for this. As a playwright myself, I was so disheartened by the idea of passing around my scripts, begging companies to take the time to read them that I took the self-producing route. While I'm by no means a large successful playwright, I was able to eventually get critics to shows and now a small local company is producing my work fairly regularly. (Took about five years, three full productions, one fringe festival one-act, and dropping repeated unsubtle hints with companies I was working with as an actor) It's not even close to the benefits of getting a full production at a mid-size or large company, but at least I got my stories out there. That said, my career strategy was motivated by despair more than anything else. I hope that more theatres adopt your attitude.

Well, all I can say is that every, single script that comes to Impact Theatre gets a read from me. There's no 'unread' going on at Impact.

This is beautiful, Polly. I am still reeling with the brilliance of the 6 scripts that were part of this past summer's Bay Area Playwrights' Festival—each one of them better than any other play I had seen in production that year (though I did also end up seeing several more spectacular new plays this summer in production). I spent the whole 3 weeks of the process wondering what the hell all these theater companies are thinking producing what they're producing instead of this new work. Then I came home to a regional theater producing Pippin, a Miller play, a Mamet and I don't even remember what else. It's utterly disheartening. The plays that are being written right now need to be seen and it just about kills me that I'm not in a producing capacity right now. As a director, all I can do is try to pitch these scripts. A couple years ago I was asked by a gay theater company to find them the next great lesbian play, brought them "Precious Little" and they never got around to reading it. Now it's getting rave reviews for a production at a "straight" theater—they missed out. Don't set it aside for when you have time—you will never have time. When you get a script, commit to reading 10 pages of it that day. Just 10. Do it.

yes! Erin - you are a NEW PLAY shero now! Bask in your new glory girl!

Thanks, Polly. I sometimes feel like I'm writing to have my scripts put on the bottom of an endless pile, so it's great to see this and remember there are those who care, and read, and respond.

Love this, Polly. Playwrights know no greater joy than receiving a good read. From our soul to yours.

A theater of pure potential.

I often feel oppressed by the idea that most of the Greek plays we have are the winners of contests. I don't see myself or the Rudes as big winners but as oddballs and I want to read the Ancient Greek Rude Mechs. I want to read the ancient play that finished 17th, the collaboratively crafted beauty that might have smuggled in the ideas of a woman or a slave or a worker or any kind of pariah.

In my heart I have a collection of lost Greek plays that no one living has ever heard. It's next to a volume of the weirdest and wildest Elizabethan dramas that have disappeared entirely from the face of the earth. That volume is next to a stack of the truest plays in America today that no one has produced. A stack that is constantly being diminished by the most ambitious readers. A stack that is constantly being replenished by students and oddballs and true believers.

Love this Kirk, such a beautiful articulation of the need for students, oddballs, and true believers!

Unread plays circling, pushing in, creeping, tangling our unwary senses until we have to sit up and take notice. I wrote something like this while at the Edinburgh Fringe last month, but you really bring the unread zombie horde into focus, Polly!

Ashe, Polly. Right before I get to my own pile this weekend. I'm going to head back here and get a little church in by re-reading The Un-read.

I feel such gratitude when readers read my plays. But so rarely have I heard that gratitude turned back on me. Wow. That's so unexpected. And makes me want to don my own hoodie and write better, riskier, saucier plays for folks like you to devour.

Polly! This short piece just jumped out and took my breath away. There have been so many really interesting pieces and exciting discussions recently, including your last on truthiness, as you called it, but this is probably the most radically consoling and confirming to me as a playwright that I have read yet on the site. I think it's inspired and profound and beautifully imagined and oddly supernatural--how you do summon up the power of the unread here.

I've been mulling over the 'problem' of plays not being read and/or if they are eventually read then how they are read--in what spirit and by whom and to what end--as perhaps the single largest failure in the theatre. And here you have said it all.

I'm grateful for your perspective, Polly, and that YOU are reading the unread.

Polly, you just made my day. I'm very grateful that you post earlier pieces below new ones because I would otherwise miss some gems like this.