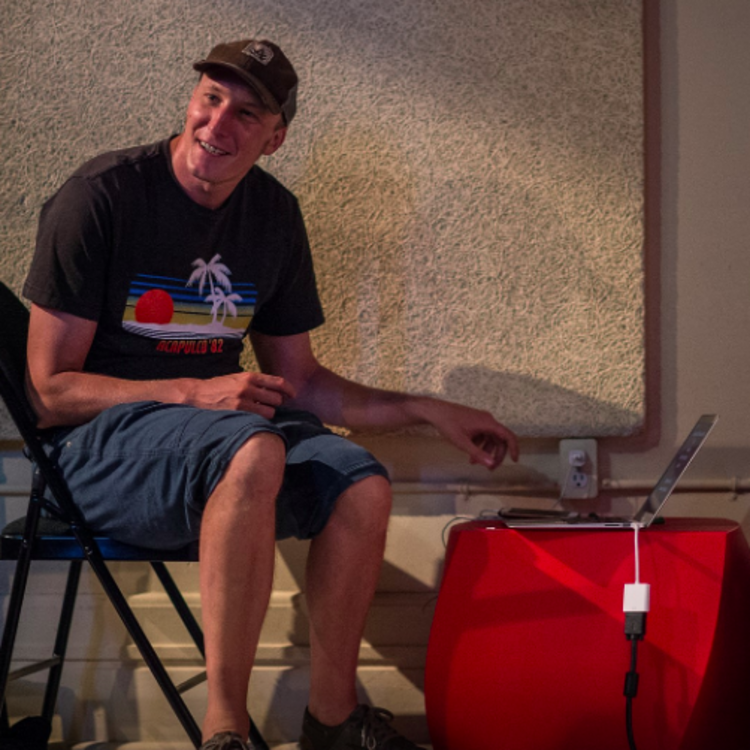 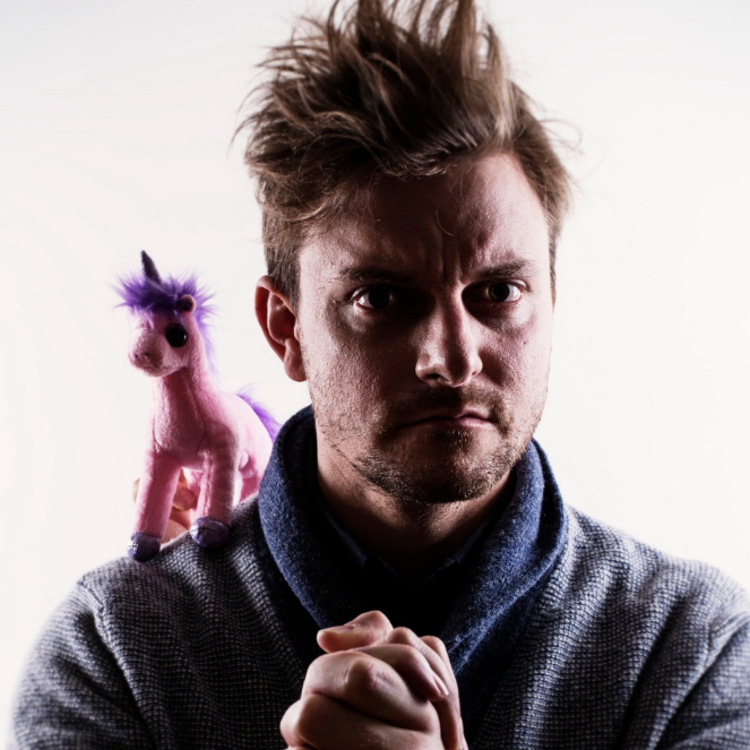 Exploring the Present and the Future

We are living in an age of digital disruption, and it’s led us—two artists and university instructors, one Canadian (Michael), one American (Sydney)—to ask some big questions: How is performance changing in the face of all this? How can digital adapt to the challenges presented by the climate catastrophe? How can we as creators use these tools without becoming complicit in surveillance capitalism? Ultimately, what is going on with digital and live performance?

We’ve been thinking through all this as we prepare for HowlRound and SpiderWebShow’s Digital + Performance Convening on 12 June, which kicks off foldA (Festival of Live Digital Art) in Kingston, Ontario, Canada. Given the focus of the festival, it seemed appropriate that we use a digital technology to talk about these topics. We chose Slack.

What follows is an edited, revised, remixed, and completely repurposed selection of that conversation. 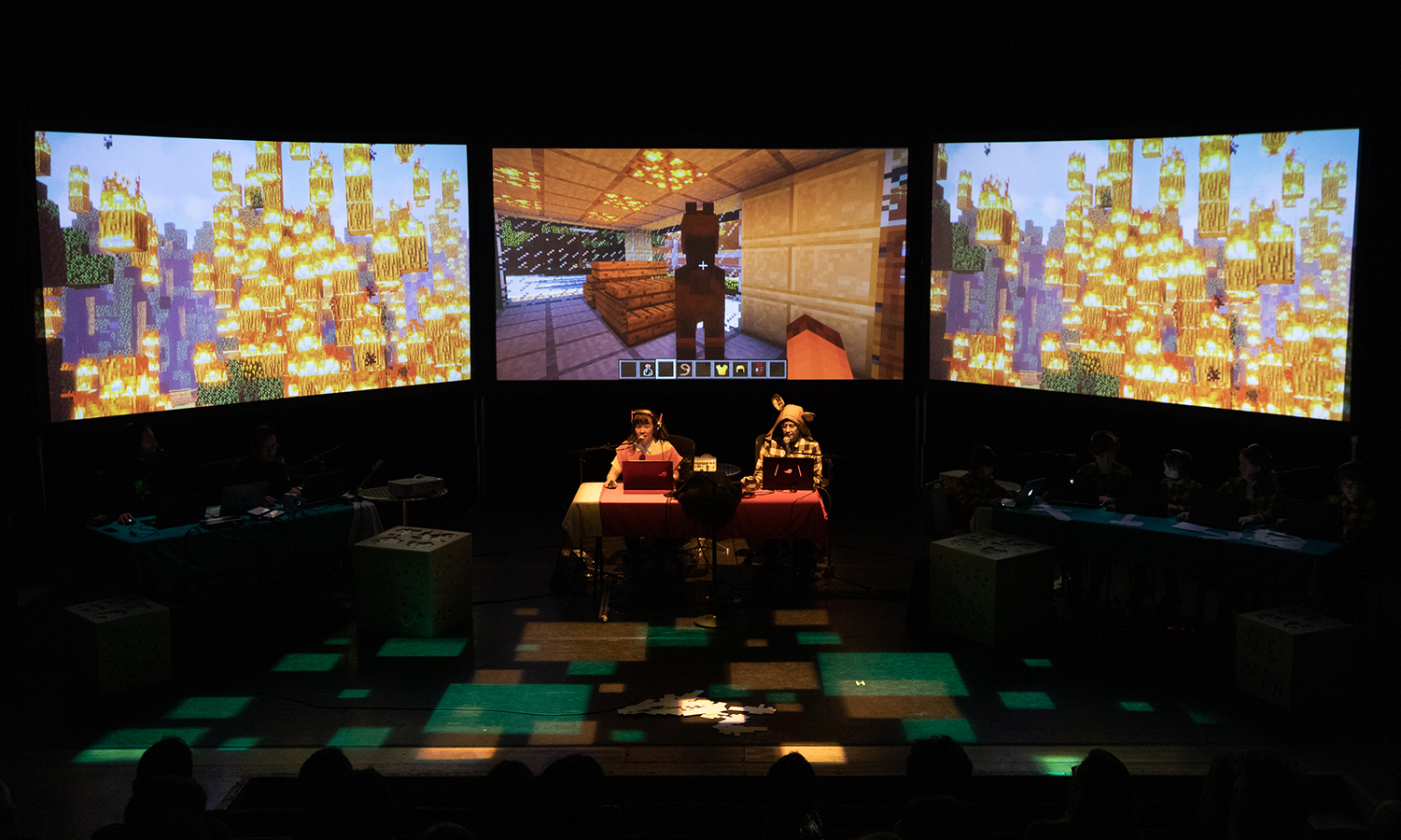 Theatre Replacement's MINE is a show that incorporates local teens to create a performance that occurs simultaneously in the game Minecraft and onstage. Photo by Claire Haigh.

sydneyskybetter [2:03 PM]
It’s a hell of a heterogeneous group you’re gathering up there.
Makes me think you can cover the spread.

Michael Wheeler [2:04 PM]
I.e. Get the basics on performance and digital?

sydneyskybetter [2:04 PM]
I don’t know what “basics” looks like anymore, outside of the context of trade associations that exist to define such things

sydneyskybetter [2:05 PM]
I mean, who knows?
At, like, a Dance/USA conference, I could tell you what their basic and/or founding principles are. But for the transnational nerd gaggle you’re assembling?

Michael Wheeler [2:07 PM]
I think we’re hoping to establish at least the strengths and weaknesses of what digital tech is doing to live performance.
We have also been talking about capitalism—or, more specifically, surveillance capitalism.

sydneyskybetter [2:08 PM]
<falls off chair>
I mean, “surveillance capitalism” really are the words right now.
It sounds like you’re thinking about how to cohere theatre aesthetics for late capitalism.

Michael Wheeler [2:08 PM]
Yep?
The ethos we have tried to foster with foldA is to not deify the digital shift but to interrogate it.
How did you become a *digital artist*?

sydneyskybetter [2:10 PM]
<falls of second chair placed just below earlier chair>
Am I a digital artist? I dunno. But my job is nearly 100 percent digitally preoccupied, so maybe that’s the same thing?

Michael Wheeler [2:13 PM]
It’s a broad term but some of us have decided to let it into our work.

sydneyskybetter [2:13 PM]
It might be a corollary to what you’re talking about in terms of the digital turn in theatre.

sydneyskybetter [2:14 PM]
As an artist, I didn’t ask for, all of a sudden, my choreographic practice to be about computer science and media. Over the last decade, it became apparent that, despite my lack of training in such matters, I needed to understand choreography more capaciously, as an art form that could contend with emerging, mixed reality technologies. Dance has long been (if you can forgive the wordplay) flexible in its incorporation of performative technologies as they happen.

sydneyskybetter [2:15 PM]
What you’re describing in terms of media and the theatre? Sounds a lot like a bunch of producers and artists who find themselves in a digital deluge, trying to figure out how to make and manufacture meaning.
Gen Z doesn’t exactly struggle with this.
Gen X does.

What would it take for a theatre—digitally enabled or otherwise—to live up to or exceed the individuated affective needs of its audience?

Michael Wheeler [2:15 PM]
I became a “digital artist” by accident I think. When I finished theatre school my theatre company could start a blog for free, and we had no money so we did that first in Toronto, and then people thought I knew how to do stuff. They were wrong initially, but I learned.

sydneyskybetter [2:19 PM]
What was the initial thing there? Because there was a ton of optimism (maybe hope?) in early bloggerly culture.
Curious if you’ve held onto that, or if it’s transmogrified, or ?

sydneyskybetter [2:19 PM]
The assumption was that people did the reading.

Michael Wheeler [2:20 PM]
We were definitely not in the same algorithmic bubbles.

sydneyskybetter [2:25 PM]
Bonkers.
I sometimes wonder if the generational shift in artmaking isn’t so much about age as who remembers hopefulness, or who has access to certain combinations of history and feeling. Like, 9/11 was a big #&@%$ moment for my career as an artist, but obviously that’s not necessarily the case for my students who weren’t around then. Different things are meaningful to folks who live through different historical moments. It’s always been like that.

Michael Wheeler [2:25 PM]
Do you think people younger than us have less hope, probably because of climate change?

sydneyskybetter [2:26 PM]
I think so.
Climate change, a reasonable expectation of privacy, optimism about structural/anti-racist work within government, “HOPE” in the Obama sense.

Michael Wheeler [2:27 PM]
If I were eighteen years old I wouldn’t listen to anyone in my generation.
Clearly we have not done well.

sydneyskybetter [2:28 PM]
That’s the f’ing truth.
Which maybe comes back to this question of what the f-bomb does theatre do given changes not only in audience attention and platform agnosticism, but in a potentially fundamental generational divide that isn’t about aging into or out of a theatregoing population? At least in the States, there’s a moment where public education in the arts just evaporates, and students who come thereafter have a tectonically different relationship to going out to a show than the folks who came before.

sydneyskybetter [2:29 PM]
Going to the ballet versus Netflix was only the beginning of our concerns.

Michael Wheeler [2:29 PM]
Certainly that generational divide existed for pre-digital reasons.
But now given the lack of hope…

Michael Wheeler [2:30 PM]
It may be exacerbated by further questions of relevancy.

<falls off a somehow third chair> 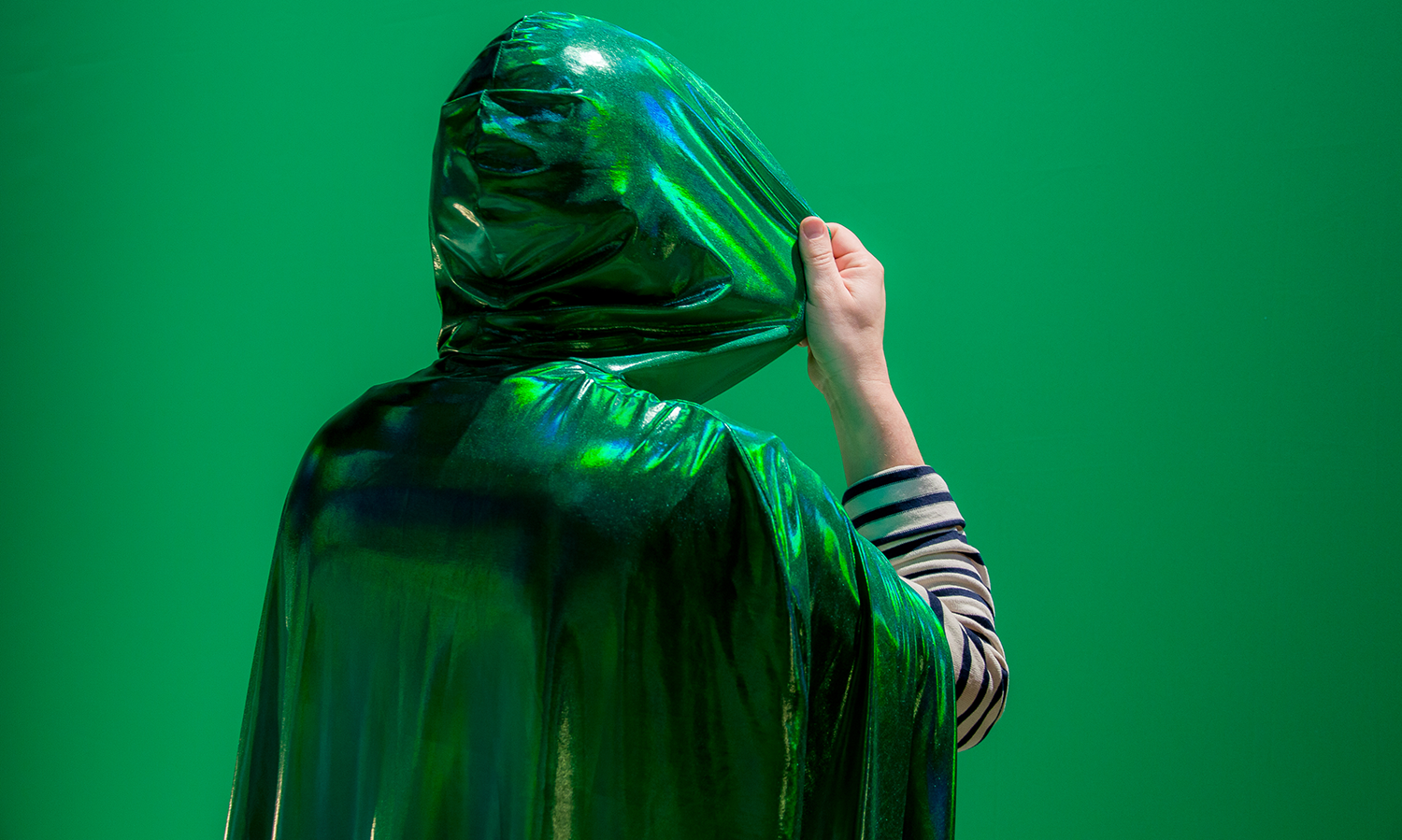 Anita Rochon has created Pathetic Fallacy a show about climate change that uses green screens so she doesn't physically travel with the show. One show only at foldA before continuing on to CanadaHub as part of The Edinburgh Fringe.

Michael Wheeler [2:31 PM]
What do you think the biggest opportunity for digital is?
Like
How can it make art more relevant urgent hopeful?

sydneyskybetter [2:32 PM]
Hmm.
I’m of two minds on this one.
On one hand, I trust the artists.
Always.
If they don’t want to be hopeful, I get that. If the work they want to make is infused with the absence of hope? I’ll get behind it.
It may be alienating, but I’m not in the business of questioning artists.
That may strain us on the producing side, in terms of marketing, audience development, etc., but those are solvable problems.
This brings me back to one of my original questions: How do we support artists who want to make work with risky (i.e. unclear aesthetic parameters or easy-to-break) technology.

sydneyskybetter [2:36 PM]
The other hand brings us back to Netflix et al, platforms that are able to modulate themselves on the fly on the basis of perceived emotional states, cues, or intentions on the part of an audience/user.
For example, Netflix rearranging its suggestions on the basis of whether it perceives you’re happy but want to feel sad, or bored and want to laugh, etc.
Affect management.
This has been an ancillary service of the theatre for, like, forever.
And now (creepily, obvs) the tech/content platforms have gotten really, really, really good at it.
So my on-the-other-hand is a question. Something like: What would it take for a theatre—digitally enabled or otherwise—to live up to or exceed the individuated affective needs of its audience?
Because that’s what the teens use Instagram for.

Michael Wheeler [2:38 PM]
We have a residency at foldA about this very question!

[People gathering is] one of/maybe the last unique selling points that live art and church have in the platform wars.

Michael Wheeler [2:40 PM]
Basically the question driving the residency—which playwright Nicolas Billon is working on with the Games Institute at University of Waterloo, is how can playwrights write for VR when the choices can be determined by the machine.
Right now we are in a Bandersnatch, choose-your-own-adventure way of understanding choice in narrative.
BUT
The machine can also make the choices for you without you ever knowing.
So: if you look at a certain character 30 percent of the time or more, this happens, etc.

sydneyskybetter [2:49 PM]
That is something that the theatre navigates pretty well, whatever the contemporary utility of embodied presence is at a given moment.
Changes over time.
Still, we gather.

sydneyskybetter [2:49 PM]
It’s one of/maybe the last unique selling points that live art and church have in the platform wars.
But that too could be about the affect management/contagion thing...

Michael Wheeler [2:50 PM]
Digital HAS pushed other forms there too.
Liveness—it is all there is left now that the data can be gotten for free.

sydneyskybetter [2:51 PM]
There is something to liveness as last bastion…
I can’t say I like it.
Our bodies just aren’t that smart.

sydneyskybetter [2:52 PM]
I did a site visit a few months ago with a skunkworks team.
They’re trying to figure out, first, what kinds of motion capture is required to make avatars in virtual space less terrible looking.
But to do that, they need to deeply understand why it is that humans are so fixated—unconsciously—with facial expressiveness and affective cues.
These are active research questions.

sydneyskybetter [2:53 PM]
The next step is to represent the affective cues from other persons in virtual space.
Hand gestures, micro facial expressions, posture. All the stuff that our bodies communicate non-verbally.
An anecdote:
There was a revealing moment at the 2019 gaggle of the Conference for Research on Choreographic Interfaces.
A historian of theatre was like, I know motion capture is great and all, but won’t liveness always be central to theatrical experience?
About fourteen engineers’ hands went up in the audience. Engineers with arts backgrounds, mind you.
Folks working at Google, Apple, Adobe, Facebook.
One of the engineers told the historian to his face (gently, but knowledgeably, convincingly, and firmly) he was wrong.
Consumer-ready, immersive technologies that do affect management/liveness are coming. Maybe not as “well” as a show in a theatre, but good enough for most people, most of the time.
It has billions and billions of dollars of R&D behind it.
And it’s owned, entirely, by private corporations.
There are abundant reasons to be hopeful for the future of art making.
The thing I wonder about is resistance.

sydneyskybetter [3:02 PM]
How to be hopeful *and* add friction to the cogs of surveillance capitalism.
I don’t want to reiterate the techtopia thing from the early 2000s that got us here, that thing where many of us trusted the rhetoric of massive platform companies that wanted us all to be friends, or to digitize all the books to liberate knowledge or whatever.
I don’t want the utopianism.
But for us to affect change—with climate, with capital—we *have* to have hope we’ll succeed and believe, fundamentally, that success is possible.

sydneyskybetter [3:04 PM]
To continue the metaphor a bit: friction is about oppositional resistance, working against inertia.
So even in the unfolding era of mixed reality, the question remains:
How can theatre do the work of resistance? What can theatre do to amplify the productive friction it historically has fostered?