Rehana is a Playwright-in-Residence at Ma-Yi Theater Company through the National Playwright Residency Program, funded by the Andrew W. Mellon Foundation. Find out more about her residency experience here, and learn about the impact of the program at large here.

History Is Not Just For The British

Rehana is a Playwright-in-Residence at Ma-Yi Theater Company through the National Playwright Residency Program, funded by the Andrew W. Mellon Foundation. Find out more about her residency experience here, and learn about the impact of the program at large here.

In response to the protest and aftermath of the New York Gilbert & Sullivan Players’ now canceled production of The Mikado, this series addresses the racist performance and casting practices of Yellowface in the American Theatre. This series was curated by Jacqueline E. Lawton for HowlRound.

The New York Gilbert and Sullivan Players have recently cancelled their planned production of The Mikado, in order to take some time to address their use of yellowface in the show. However, this cancellation is not the end objective—rather, an end to racist yellowface practices (and blackface, redface, and other forms of stereotyping and cultural appropriation) so rampant in theatre is the true goal. There are some who are objecting to the decision to cancel, claiming “censorship” if The Mikado is not done exactly how it was “performed historically” or “how Gilbert and Sullivan intended.” Howard Sherman has cleanly debunked the historical accuracy argument, while the Bitter Gertrude blog negates the idea of yellowface being intrinsic to Gilbert and Sullivan’s original intent. Michael Dale mentions in BroadwayWorld how Gilbert and Sullivan themselves would often update their work to adjust to the times, so perhaps we should consider the possibility that the cries for “historical accuracy” are hiding a more insidious intent.

I’d argue that the “historical significance” of The Mikado is merely being used here as an excuse to denigrate Asians via pernicious stereotyping and offensive imagery. The “historical significance” argument is a selective and myopic one that celebrates Victorian tradition while sweeping aside centuries of cultural imperialism and oppression against Asians in this country, from the Chinese Exclusion Act of 1882 to the 1942 relocation of all Japanese-Americans to internment camps. What’s important to recognize here is that the very same violent, bigoted imagery that was used to fuel such campaigns of anti-Asian discrimination is being recycled today by those who insist on performing the Mikado in yellowface. 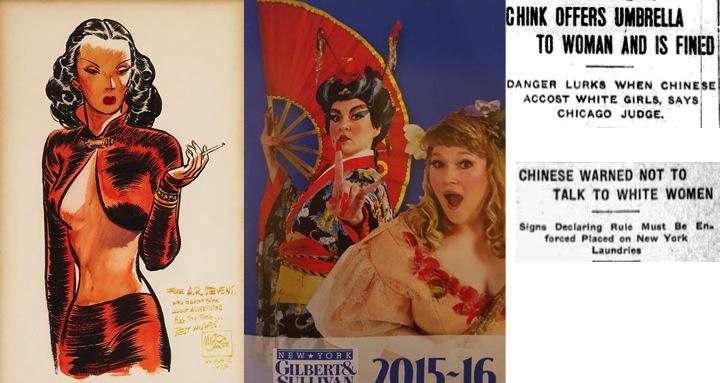 There are many Mikado apologists that claim that The Mikado is merely satirizing the “real” people of historical Victorian England through a “fictitious” Japanese town. And yet, Japan is a very real place—here’s a reasoned response as to why “mythical” Japan can never be a thing. Additionally, let us recognize that fictions are not neutral; they are a human construct. It is an active choice to create a “fiction” that so closely adheres to a painful centuries-long historical legacy of demonizing Asians. If NYGASP’s production was meant to be an imagined place, then why did their production photos so closely adhere to the grotesque depiction of Asians seen in the all-too-real anti-Asian propaganda of the eighteenth through twentieth centuries? Yellowface is not just about make-up; it’s about damaging caricatures. The brochure features a nameless Taiwanese-American actress in three-inch press on nails, brandishing a fan at a gasping white lady, which has everything to do with Yellow Peril and the trope of the “Dragon Lady” and very little to do with Victorian England. If we value the "historical context" of The Mikado but fail to address the longer history of cultural imperialism in this country, we are saying that pejorative imagery and stereotypes of Asians are more important and accurate than actual Asian people.

Critics who defend The Mikado as a brilliant lampoon of bureaucratic privilege in Britain don’t seem to grasp that their insistence on performing this work in yellowface echoes the very same bureaucratic privilege they purport to lampoon. In today’s age, the choice to perform in yellowface doesn’t comment back on bureaucracy in Britain—it reflects the bureaucracy of the American theatre, where a white Artistic Director does it the way he’s always done it, the “PC-police” and dissenters be damned. To ignore all this and continue to perform a yellowface Mikado is not just blindness; it’s a willful perpetuation of institutional racism and centuries of exclusion.

Why does yellowface hold such a continuing, lurid appeal to white artists? The recent outcry over this New York production comes fast on the heels of a Seattle yellowface Mikado where over twenty articles were written in protest. While it’s admirable that NYGASP responded proactively to concern from the theatre community, it’s also perplexing that they didn’t plan better, or that their artistic sensibilities haven’t kept up with the times. Why did they find themselves in the position of having to cancel the show three months before the show went up, allowing for their audiences to conflate banning The Mikado (which no one has done here) with rethinking racist choices in The Mikado? And given their audience’s reactions on social media, when will the clamor to keep yellowface alive and well stop? It's worth noting that a week after NYGASP announced its cancellation, Dames at Sea marched into previews with Fu Manchu mustaches and other yellowface practices. So I am forced to reiterate: when will it stop?

I believe it will stop when people start seeing Asians as more than just clothing and food, and when they can acknowledge the longstanding damage they’re creating by perpetuating yellowface in the name of “history.” You want to appeal to history? Then know this: there is a link between this Mikado production and years of anti-Asian discrimination, between minstrelsy and yellowface, between groundless FBI espionage charges and anti-Asian hate crimes and bullying. So in light of the violence that occurs out in the world I think we ought to consider the stories we tell and the narratives we champion—whether we want to historicize work that builds empathy, or perpetuates otherness. The two aren't separate; these are active choices we must make everyday.

NYGASP has made a choice to try and find a creative way to make their art without using oppressive tools to do so. I beg of all of you—funders, donors, audience members, theatre-makers, and Mikado apologists: if making art is an active choice, then let’s make a different choice. Help NYGASP and companies like it strip The Mikado of its painful-but-optional orientalist trappings, provide educational resources for any future productions of the piece, cast marginalized actors in these classics that eliminate their voices…do something to break the cycle. Many in the theatre community have made eloquent, logical arguments against yellowface and orientalism. But institutional racism escapes eloquence and defies logic. Now we can only insist that human decency wins out—that an appeal to “history” includes the history of all of us.

In response to the protest and aftermath of the New York Gilbert & Sullivan Players’ now canceled production of The Mikado, this series addresses the racist performance and casting practices of Yellowface in the American Theatre.

On the Merits of Yellowface
Nelson T.
Eusebio III
Essay

On the Merits of Yellowface

Nelson T. Eusebio III addresses the argument that the “best” actor must always be cast in a role, regardless of race.

Why The Mikado is Still Problematic
Desdemona
Chiang
Essay

Why The Mikado is Still Problematic

Director Desdemona Chiang provides an overview of Asian American discrimination and cultural appropriation in the US and argues that there is no way to divorce The Mikado from this problematic history.

Leah Nanako Winkler, The Mikado, and This American Moment

Victor Maog interviews Leah Nanako Winkler on her response to the controversy around NYGASP's The Mikado.