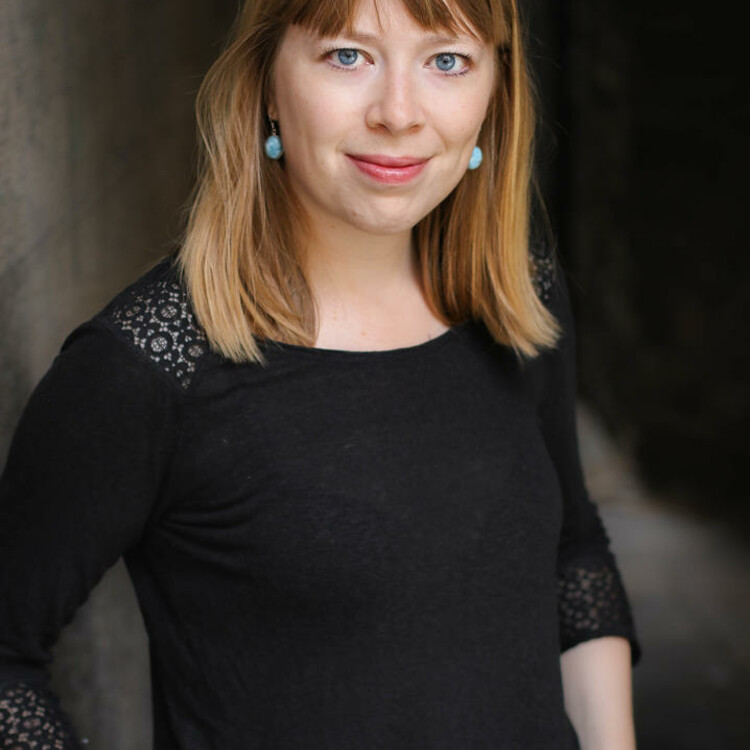 As a theatre director, developing the world of the show and defining the way an audience interacts with it excites me. Because my undergraduate training didn’t extend beyond the studio theatre environment, during my first years as a director in New York City, as I attempted creating work in non-traditional spaces, I made lots of mistakes. It wasn’t until I developed Oh Heroine How I Love You! as part of my master’s at the Royal Central School of Speech and Drama in London that I was rigorously pushed to investigate how to properly merge theatrical world-building with an already existing site.

In the show, the audience has been invited to an event at the local library by the spirit of Emily Brontë. During her lifetime, this Brontë sister actively avoided leaving a legacy, which led biographers to make assumptions about her sanity, sexual tendencies, and authenticity as a writer. Oh Heroine!’s focus is on Brontë’s desire to address history’s claim on her, and the library feels like a safe place where she can do this. The space itself comes to life through Brontë’s characters who live in the bookshelves. 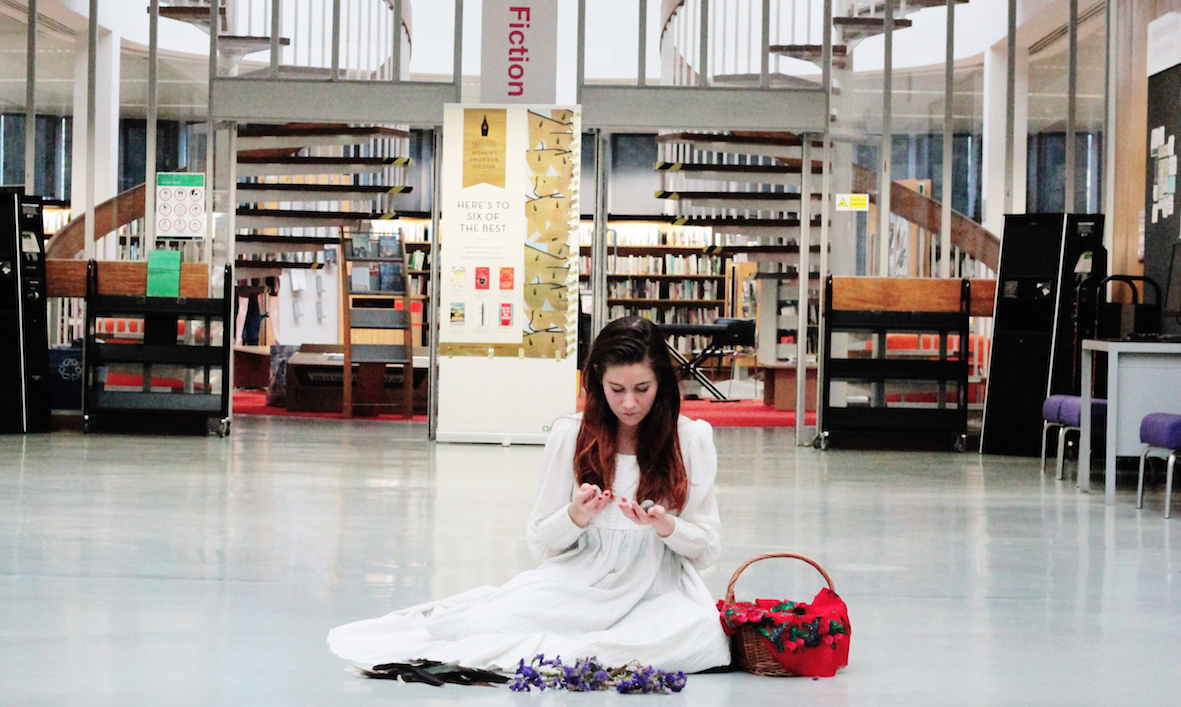 Eighteen months earlier, I had visited the Swiss Cottage Library in London with a brief to react to the space for a scenography class. On a balcony in the fiction section, looking out across the atrium, I was overcome by the feeling of being haunted by the ghosts of fictional heroines. My reaction to the space, and to the scenography brief, was to recreate this feeling for an audience in a show, one that would be performed onsite. I crafted a ten-minute piece of music and movement that fit the space, using Catherine Earnshaw from Wuthering Heights as the chosen heroine. As a literary ghost, Cathy was the perfect character to embody the feeling of a heroine haunting the library.

This short performance felt like the beginning of something bigger, and I wanted to investigate why I had chosen Cathy as a character over other literary heroines in a longer performance. Because theatre spaces were more familiar to me, my first thought was to move the full version there. I began to devise and write the second half of the show without referencing the library itself or anything in it, imagining the piece in an environment that would offer a blank slate similar to the black box spaces I was rehearsing in.

While it is possible to stage an intimate performance in a theatre with flexible specifications, moving this specific production from the library to a black box meant losing both the aesthetic atmosphere of the site and the exploratory and communal energy the library held. If I were to do it again, I would not let myself be influenced by the kinds of spaces available to me for rehearsal or those that I imagined were easier to produce a performance in. In trying to fit the extended version of Oh Heroine! into my original taught definition of theatre, I was on the road to creating something that wouldn’t fit anywhere.

In trying to fit the extended version of Oh Heroine! into my original taught definition of theatre, I was on the road to creating something that wouldn’t fit anywhere.

I thought back to why the library was important in the first place. Growing up an avid book club member, I still find bookish environments inviting and comforting. And I realized that as both a theatre practitioner and a person, I am highly influenced by my physical environment. I also understood that my interest in making this project resided first and foremost in how the audience experienced the work; they were the most important part of the project. Knowing that the library, as a site-specific venue, could invoke some of the nostalgic, comforting, and curious feelings I wanted to stir in my audience, I gave myself permission to utilize it.

It was incredibly helpful to have an ally at the library who helped me navigate how to collaborate with this non-theatre venue. I worked with a team leader from Camden Libraries who had participated in the original performance and was supportive of me developing the project further at the Swiss Cottage Library and, ultimately, on tour to two additional libraries in the Borough of Camden. This partnership meant I could regularly test ideas onsite, and it allowed me to learn to use the site beyond what it offered me in a practical sense—lots of different spaces, book shelves, an environment of familiarity—and better understand the emotional and cultural resonance of community libraries.

At this point in my process, I was developing a piece that would be performed in three different library venues, so I needed to make decisions that could be applied to all spaces. There were three areas I needed to use in each library: one with enough floor space for a the performer to dance in, one with seating somewhere within the bookshelves, and one that allowed the audience to take a journey through the library (in all three instances, this final space was on an upper floor). 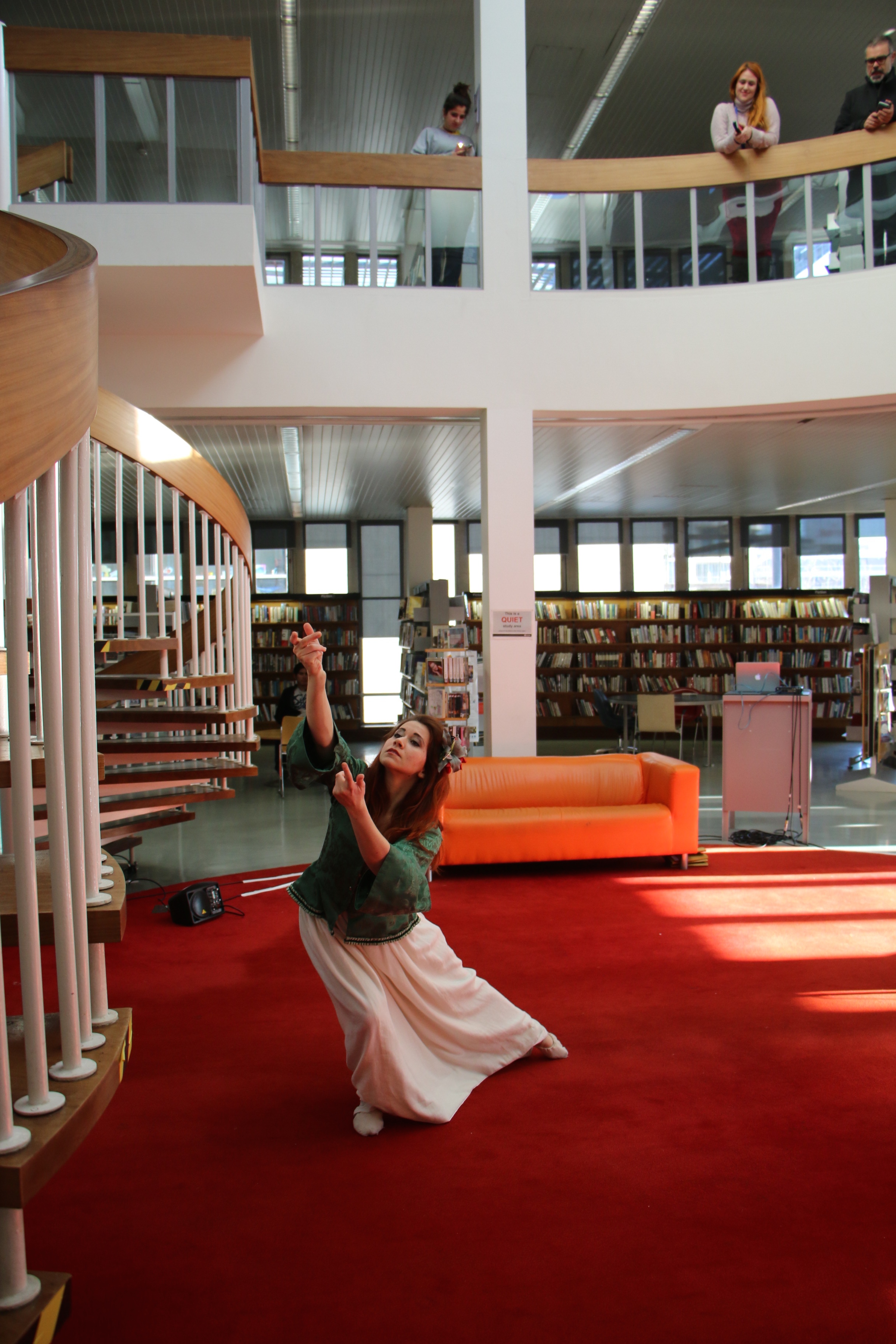 When designing a show for a site-specific space, a lot of decisions are made for you based on what is already there. I found it most exciting to collaborate with the space in choosing my production materials. Because community libraries are colorful places, largely due to the variety of book covers, I chose the opening costume to be a white dress, which would stand out. Props were limited to a singular basket of items that represented the Yorkshire moors—a prominent environment in both Cathy and Emily’s lives—and copies of Wuthering Heights altered with pop-up images. We brought in our own speaker system due to the inconsistency of the library’s existing PA system, but we did not bring in additional lighting—I didn’t want to visually transform the space but instead mirror the true experience of reading there.

There needs to be a clear advantage to producing the piece site-specifically or else it may not be worth it.

While making Oh Heroine!, I developed a process for approaching site-specific theatremaking that I could use for future projects—something I wish I had had in my early New York City days.

My first step is to ask the following:

The first question can initially be answered practically. Is the audience seated or standing? Mobile or stationary? Free-roaming or guided? Is the production limited to one location or many? The answers will help determine what size and shape the space needs to be. Next I would answer this question from an emotional perspective. How do I want my audience to feel, and is that feeling the same or separate from what the characters in the show are feeling? How can I use the kinds of feelings most often associated with my site as a tool for affecting the audiences’ emotional responses and levels of investment?

To make decisions about the second question, I think about the existing architecture of the space and how that affects light and sound, and I look at what objects are inherent to the location that I can use to my advantage. I imagine how the layout will need to be rearranged to accommodate the audience and what props need to be brought in, keeping in mind that doing either of these things might change how the site is perceived.

Finally, I focus on answering the third question. Is the site intrinsic to the show’s structure? Is it a character in and of itself? If a show can be performed in a theatre very similarly to how it performs in the site, is the site really necessary? There needs to be a clear advantage to producing the piece site-specifically or else it may not be worth it.

Transposing traditional theatre staging, audience seating, and typical light and sound systems onto a site does not make a show site-specific; that’s more like something being “performed on location.” I came to this opinion through my own mistakes of trying to make a show that could satisfy every option, as well as seeing other productions that, though marketed as site-specific, missed opportunities to create a unique audience experience by underestimating the site’s attributes and implanting a theatre into it.

Working in non-traditional venues comes with lots of challenges: lighting and sound equipment are likely not readily available, and there may not be proper structures for audiences, like front of house spaces, ticketing systems, or even bathrooms. But despite these challenges, if you treat the site as an equal collaborative voice in your theatremaking process, the experience you create can be truly transformative for your audience.