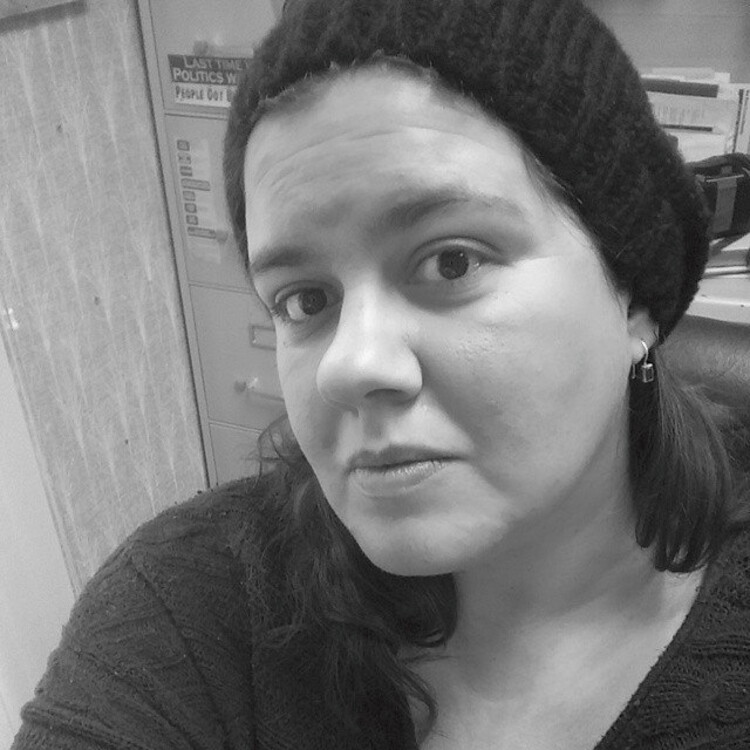 When She Speaks, I Hear Her Revolution

Having just celebrated its five year anniversary, When She Speaks I Hear the Revolution has found a comfortable niche in Salt Lake City, Utah’s populated poetry scene—most coffee shops have some kind of open mic or slam during the week. Despite this popularity, something that resonates through many of these performance spaces is the overwhelming presence of men and the male gaze. But once a month, women gather to share their stories at Jitterbug Coffee Hop, a small coffee shop with a Betty Boop theme.

Founder Stephanie Novak came of age during the Riot Grrrl movement of the 1990s. Inspired by women like Kathleen Hanna, she searched for a space to share her voice when she moved to Salt Lake Valley. As she walked into the slam open mic scene in the area, her voice faltered in the poetry “bro” culture that prompts competition. Despite the more progressive atmosphere of poet culture, there were few women, and even fewer trans* performers, and poets of color present on the poetry scene.

If you’re a woman and you’re coming into an open mic, or poetry scene that’s already dominated by men, breaking in is very difficult. And that’s not even touching on the trans* experience.

In true Riot Grrrl mentality, Stephanie decided that if a space did not exist, she would create one. Reaching out to female musicians, storytellers, and poets of all kinds, they worked to create a safe space, where the voices of women and the trans* community could be raised and heard. No one is turned away at a When She Speaks event. The audience often has men, looking to open their minds and share their own stories.

According to Christine, who has been attending When She Speaks over the last few months, “There do need to be more spaces for women. There are women who do really well, but there is still something about it. We’re still kind of participating in this very masculine theatre. We’re playing on their terms.”

The coffee shops have shifted over the past five years, but the message remains the same: come, be heard, and share what you want to share. The words of Staceyann Chin, Adrienne Rich, and Andrea Gibson are heard as often as original works. Storytellers read from novels in progress. Musicians break out their guitars. There are improvisational moments, and jokes told.

It is an intimate setting. Between the tables where people share nachos and espresso milkshakes, children and dogs of regulars often play. While attendance can reach fifteen or twenty, usually it is ten people who come together and rather than a stage, the small group will form a circle. Between rounds, Stephanie poses questions that most open mics do not ask: What women have inspired you? What kind of woman would you like to be? Who is your favorite female author?

These questions spark conversations that go beyond the performance. On July 11, the invitation of one poet to share led to a discussion regarding the abuse of autistic children in schools designed specially for their education. The poem itself was never performed, but the conversation was more important than the piece. This was not the only night that social justice became a theme of the conversation. Common points of discussion include: bisexual erasure, the trans* community, women’s rights in a polarized society, and women in public spaces.

“I think for me, as a woman I’m tired of being oppressed by my parents, by religion, by society, by my sex, and by anyone. I want to hear my words. There’s a lot of stuff going on in here,” says Wendy, motioning to her entire body.

More than just an open mic, When She Speaks throws back to its Riot Grrrl origins and the community produces an old-fashioned zine every couple of years—their latest volume released July 19. There are special events throughout the year with featured themes, including an Erotica Night where participants are encouraged to get sensual; the always popular Banned Books Month; and Pride themes that focus on the lost voices in the “gaystream” community—bisexual, pansexual, and trans*.

There are more women in open mic, and poetry slam scenes, which is wonderful to see. If you’re a woman and you’re coming into an open mic, or poetry scene that’s already dominated by men, breaking in is very difficult. And that’s not even touching on the trans* experience, which is something else entirely. To come in and share your stories with someone who doesn’t understand is about people being heard. We want to share our work and we want to do it in an environment that isn’t judgmental.

When She Speaks generally meets the fourth Saturday of every month at Jitterbug Coffee in Salt Lake City, Utah. If you are interested in attending, or in talking to Stephanie about how to get a When She Speaks open mic going in your area, please check out the Facebook page.

Hey! That's one of the reasons I wrote this - I would love to see more women coming and participating.

Hi. Thank you so much for writing this. I live in SLC and had NO IDEA about this community. As a queer, feminist performing artist in SLC, sometimes things can get a bit lonely. I would love to connect about ideas and shared projects. Always grateful to HowlRound for connecting me to people across the world and in my backyard...Facebook page liked...next "When She Speaks" on my calendar. Great work!

Hey! That's one of the reasons I wrote this - I would love to see more women coming and participating. I'm glad you've hooked up with the facebook page and we'll see you at the next open mic. :)