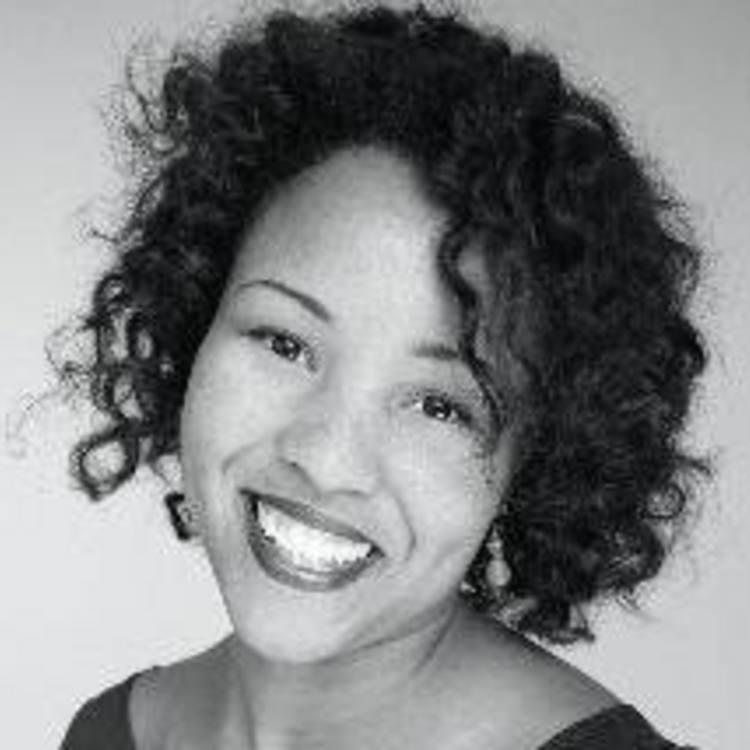 When hip-hop and classical music combine, it never fails to turn heads, and for many reasons. I’ve seen jaws drop in the audience of the hip hop orchestra Dakah, or after a crowd leaves concerts by Black Violin, the touring hip hop violin duo. Rappers like Nas use symphonic tracks in their music, but despite all of these collaborations, Ordinary Magic may be paving the way for a new subgenre in theatre, the spoken-word opera. And, when I say “spoken-word,” I am talking slam-poetry style. Some of you may remember the television series Def Poetry Jam hosted by Mos Def and created by the iconic rapper Russell Simmons. It was part of what brought spoken-word poetry out of neighborhood cafes and into popular culture.

The only way that the craft continues to thrive is when we can expand the bounds of where it can exist.

I tried merging the worlds of opera and the poetry scene when I hosted Opera Open-Stage (an open-mic for opera singers in a slam poetry format) at places like the Nuyorican Poet’s Cafe in New York City—it can be done. It was a part of my desire to tell a different story about opera—who was supposed to be singing it, and where opera was supposed to heard. Then this year, I ran across two spoken-word artists who would write and produce a hip hop drama with an operatic musical score. This new work, Ordinary Magic: A Spoken Word Opera, was not just an epic experience for me as an Black American opera singer, but it also stimulated new and meaningful conversations about what theatre is today, who the players are, and what happens when creators in hip hop and opera truly collaborate. Last year, I wrote an article for HowlRound about diversity and inclusion in the theatre, especially as it relates to audience development and sustainable models of community engagement. As I reflect on that now, I am reminded of what made Ordinary Magic such a unique experience for me. It was that the performers, the producers, and I were local and a part of the community. I often wonder what major theatres (especially opera houses) would be like if artists/producers/directors could work and thrive in their hometown. I want to have more performing opportunities like the one I had in Ordinary Magic, where I am singing opera to people who look like me, live in my neighborhood, and know my name.

Issac Brown aka Ise Lyfe is the director of Ordinary Magic, a recording and performing artist, author, justice advocate, businessman, and social architect. Google him—you’ll see how well he wears all of those hats. Ise Lyfe has over a decade of experience in performance, writing, and education that includes TED Talks, keynotes, and writing for The Huffington Post. The City of Oakland even celebrates “Ise Lyfe Day” on his birthday.

The other genius that actually conceived the opera is Gill Sotu. Originally from San Diego, he just finished an artist residency at the Jacobs Center for Neighborhood Innovation, and seamlessly wears the hats of musician, DJ, writer, TED speaker, and cultural producer.

I was fortunate enough to talk with both of them after our premiere performance. I interviewed them during the rehearsal process as well, and found their collaborative relationship is one to be admired.

Malesha Taylor: Gill, was this your first time writing a play of this magnitude? If so, what was the process like for you as an artist and cultural producer?

Gill Sotu: Yes, this is the largest thing I have ever worked on or have been in charge of. It also had the most moving parts. Sound, lights, stage, band, actors, etc…let alone consistently working on the script even after opening night. However, I wouldn’t trade it for anything. It has been one of the most rewarding experiences I have ever been a part of.

Malesha: How was the music created for this piece? Can you describe the music director's role and how the score was created?

Gill: We started by having the musical director, Brandon Cerquedo, just sit and listen in on a couple of table reads of the play with the actors. We actually recorded the table reads so that he could hear the energy of the sections a cappella. Then we had meetings every two weeks or so for four or five months. I would tell him the mood I was looking for, and give or show him examples. He would show me what he was thinking of for a section, and play it for me or show me an example of another song in a similar vein. Bit by bit, it came together. Some of the songs are from my recent album “Neo Nostalgia,” which was produced and created with me by an amazing singer/producer out of LA named Kevin Sandbloom. But the rest came from Brandon, with me overseeing the whole thing, tweaking his magic here and there to fit what I felt was needed for the piece. His genius made my job easy.

Malesha: Are there other opera companies or classical music ensembles interested in collaborating on future performances of this work?

Gill: Not yet—but I know that the world has not seen the end of Ordinary Magic! 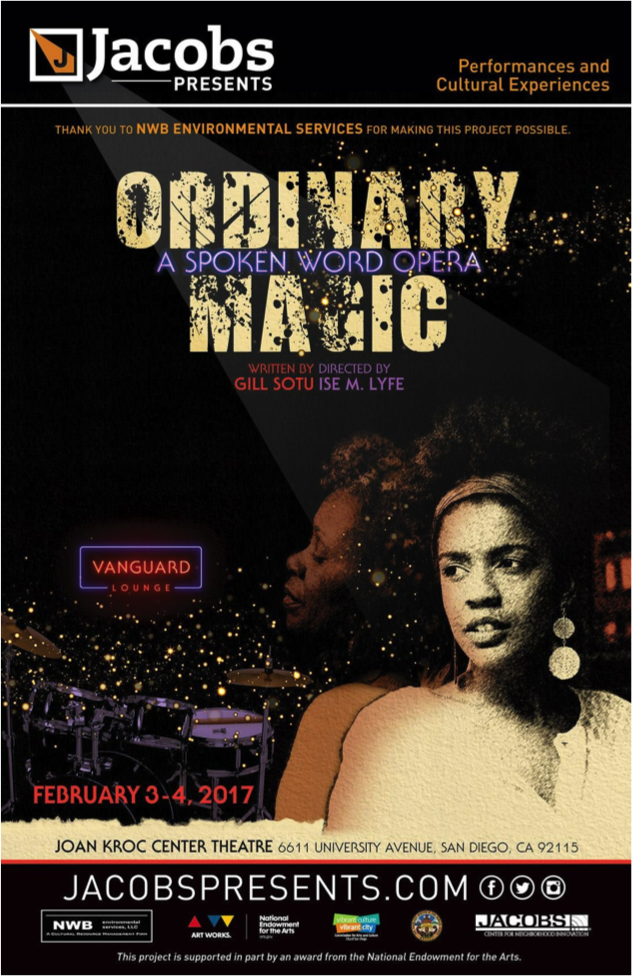 Malesha: What was your audience like? What type of feedback did you receive?

Gill: I still get people on the street or at shows telling me how much they enjoyed Ordinary Magic. I really have not heard many negative reviews, which I am relieved about, because when you are steeped in something for so long you can get lost, and it is hard to take a step back and look at your work objectively.

Malesha: How was this piece received in the spoken-word community?

Ise Lyfe: Two weeks after the piece, I ran into Shihan van Clief, (a spoken-word artist) at the airport and he asked, “How did the spoken-word opera go in San Diego?” People across the country were aware that this was happening and responded with great curiosity. The only way that the craft continues to thrive is when we can expand the bounds of where it can exist. When I was twenty-one, I wasn’t thinking about doing something like this. I was eating a slice of pizza, sitting with a notepad, and finishing writing the best thing I could possibly write. Work like this expands the culture, and it keeps us in-the-pocket and teaches us to do better things. 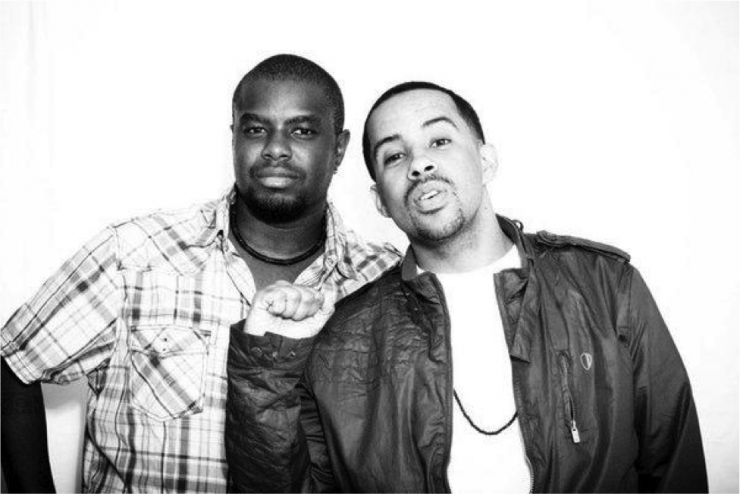 Malesha: This is one of the few shows I’ve seen where the audience was really a reflection of the community, and not just made of typical theatregoers. What kind of feedback did you receive from folks after the show?

Ise: I thought the audience was really there and present and rocked through the whole show—everybody was positive. I think what’s really good is when people are not just wowed by something, but that you feel people really resonate and feel personally connected to the piece. That’s something I really noticed with this show.

Thanks for a great reply! What do I think the difference is? I've been attempting to discern that in my own journalism work.

Thank you for a fascinating piece, Malesha. I love musical theatre, but new opera--especially when it explores boundaries--needs to be reported too. I would posit--and am curious as to whether or not you agree--that some ways opera might be a bit easier to diversify than musicals (partly because of musical theatre pedagogy's focus on the mid-century "Golden Age"). (I was disappointed when some promising new opera companies either didn't get traction or closed their doors to submissions.) Something I've been exploring in my own journalism work is the difference between musical theatre and opera. Do you have an opinion on what the difference is?

Hi Donald, thank you for this comment and your question. There is so much to talk about here. First, I find the difference between opera and musical theater is the use of the vocal instrument. For example, Porgy and Bess is often seen as a musical, but the original score is so vocally demanding it calls for the vocal instrument of a trained opera singer rather than a musical theater singer. This is especially the case when using the full orchestra that Gershwin wrote for and the singers having to project over the orchestra without mics. Opera singing is usually not amplified in the way musical theater singing is. The opera singer also usually doesn't use the speaking voice as often, and primarily uses the vocal instrument for singing. Most of the dialogue is sung and the vocal music (delivery and presentation) is as important as the drama. Second, I do believe new opera is difficult because it demands a new audience and new vision to target the new audience. The audiences of musicals and operas are typically made of folks who attended opera/theater for multiple generations. The new audience for contemporary, hybrid and out-of-box productions is going to take some work to build in this generation (since most of us didn't grow up attending the theater/opera in the 80s/90s). And, what I find is the folks making decisions about production, marketing and branding for new opera and/or new theatrical experiences have traditional opera/theater backgrounds- which I think can make it more difficult to implement new vision and new ideas. Finally, theater and opera (new or traditional) is still typically funded in the same way it was funded in Mozart's era. Coming up with new funding sources will alter how productions are branded and vice-versa. That's a whole other area of conversation. This production, "Ordinary Magic," was not produced, directed or marketed by our local theater or opera folks, which may have had a huge influence on our audience composition. --What do you think the difference is between musical theater and opera? I would love to following your writing on these subjects as well. Thank you for sparking this conversation.

Thanks for a great reply! What do I think the difference is? I've been attempting to discern that in my own journalism work. One composer who has written both once remarked that opera actually is a bit easier to write because "there are no rules."

To be honest, my own thought used to be that they're generally the same; operas can have dialogue, and musicals can eschew dialogue and/or be vocally demanding. However, I've had the pleasure of talking to several industry professionals, and many have shot that down, insisting that there is a difference. The most detailed discussion I was able to have on the topic can be read here:

Also, you can read this one, in which a composer was (justly) insistent that I NOT refer to his sung-through musical as an opera. I was taken aback by the force of his response, but it is to his credit that he has strong feelings about what his show is or isn't:

You raise an important point about generation politics and funding. (You addressed them separately, but they do overlap.) Often the response I hear when I raise the point about the need for new works is "the patrons want older/traditional stuff." Of course, that's an easy excuse and not entirely true; some patrons are eager to invest in newer works. But creative solutions do need to be discussed.

Really interested in this.... Is there a DVD to buy of Ordinary Magic'? Or links to excerpts online? I'd love to experience a little - unless you have plans to tour this to the UK sometime soon?

Hi Katie, thank you for your enthusiasm and interest in video footage. Can you shoot me an email so I can put you in touch with the production team? malesha@musesalon.org